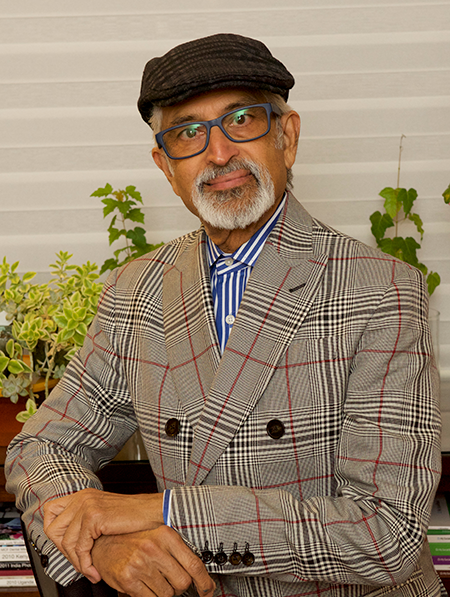 I arrived in Canada in 1975, having spent the previous three years in the US, after leaving my home country of Uganda in 1972. At that time, President Idi Amin, the dictator in power, had decreed all South Asians in the country had been usurping the economic resources of the country—an allegation which was patently untrue—and in an effort, in his mind, to restore some balance, he gave all Indians living in the nation 90 days to leave and our passports were immediately cancelled. We became stateless in the country of our birth. At the time of independence, I renounced my previous British protectorate citizenship and proudly became a Ugandan. To be told now I was no longer officially a citizen of my country was a devastating blow. This is where I was born, grew up, studied, and had been working for the government as a wildlife biologist at the Queen Elizabeth II National Park.

My life previous to the Ugandan Asian Exodus, as it came to be known, was essentially perfect. After attaining my masters in zoology at Makerere University in the capital city Kampala, I was working my dream job where every day was like being on what westerners would probably call a safari vacation. Whenever I hear that adage, ‘if you do what you love, you’ll never work a day in your life,’ I am immediately reminded of my life in Uganda and, of course, everything I lost.

A mere two weeks after we were married during that period of upheaval, my wife, Divya, and I found ourselves refugees on what was essentially meant to be our honeymoon. Although I’d applied for visas to both the US and Canada, we were only accepted by the former and landed in Boston where we stayed for three months with a host family before making our way first to New Jersey and later Virginia. For a moment, I thought we might eventually be ok when I was offered a promising position in my field but those hopes were dashed when the opportunity was rescinded due to the fact I was still considered ‘stateless.’

My wife’s two sisters were living in Winnipeg, along with a few other family members and friends from back home, which is why we found our way here.

My first impression of Canada was enthusiastically positive. We found the people here generally friendly and were soon able to find ourselves settled after years of transience and toil.

The most difficult challenge I faced was not being able to find a job in my field, which was tough: I had always loved animals and had pursued studies in zoology to have a career working with wildlife. To have those aspirations decimated by the whims of a madman and find myself in a foreign country where I couldn’t continue the work I knew I was meant to do was devastating.

We did not receive any support from the community back then but were able to rely on my wife’s sisters and my brother who were already settled there and offered us room and board while we endeavored to make our own way. In fact, with the family there we did not rely on the government or the community.

I still miss Uganda very much. The natural beauty, the wildlife, of course, the weather, the freshness of the fruit we would pick and eat right off the tree, but most of all, I miss the people. The Ugandans are a serene and tranquil people, gentle in demeanor and temperate in disposition. I especially miss one fellow who was working for me at the time of our expulsion and was heartbroken by the order. As I was single then, he was my home keeper, cook and general assistant.  He was determined to go with me wherever I ended up after I was expelled. He did not understand that even I did not know where I would end up. Of course, that never happened but I will always remember his loyalty even now, almost 50 years later.

I returned to Uganda in 2004 and was heartbroken by what I saw. At the national park where I used to work, the wildlife populations have been dramatically depleted. The savannah used to be full of animals, living in their natural habitat, but without proper stewardship or conservation, the numbers have dwindled.

The country as a whole appeared far more dilapidated and run down than when we lived there. Without the Ugandan Indians, who formed a large part of the middle class and employed thousands of Ugandans, the economy was in ruins. The buildings in Jinja were approaching collapse and the picturesque town of my youth was simply no longer.
Of course, it was also brilliant to return my home country, even if things had deteriorated since we were forced out. The bond and connection forged to one’s native land is not easily severed, which I realized the moment I stepped off the plane. I kissed the ground on landing there in Entebbe.

I was a wildlife biologist at Queen Elizabeth National Park in Uganda in a supervisory and upper management role. Upon arriving in Canada, I became a photographer/entrepreneur and at one point owned four Sooter’s Studios franchaises in Manitoba; I was a corporate officer at Mondetta Clothing where I was both general manager and VP of Human Resources; and finally, I was the philanthropist/founder of Mondetta Charity Foundation. I have done many things in my life and can confidently state I have lived an accomplished life, a happy life.
Looking forward, I hope to continue my philanthropic work in East Africa (Uganda and Kenya) while also being an active community member here in Winnipeg.

Back in Uganda, I pursued photography as a hobby but, after failing to find work in a zoological field, it became my career here in Canada. My sister-in-law was working at Sooter’s Studio Photography and introduced me to the owner with whom I entered a franchise agreement to open an outlet in Thompson, 8 hours north of Winnipeg. We lived in Thompson for six years, which my wife and I quite enjoyed. It was a good start for us and offered us a level of success allowing us to hire a manager for our Thompson location, purchase another in Calgary, and two more when we returned to Winnipeg. All told, I was in the photography business for over 20 years.

In 1986, my two nephews who were also born in Uganda and studying in Winnipeg, along with their two friends from Kenya, started a clothing company - Mondetta Clothing. Because they were quite young and new to business, I became their original financial backer as well as mentor. As the company became successful and continued to grow, while the photography industry began to wane, I shuttered by studios and became a general administrator and head of HR to more directly influence and benefit day-to-day operations.

In 2004, realizing it was time we looked to our past and roots and try to do some good, we established the Mondetta Charity Foundation, of which I was the president and chairman of the board, with the aim of pursuing philanthropic activities in Uganda and Kenya, focusing solely on the children in those countries who are often the most vulnerable victims of the poverty, strife, violence, and sickness endemic to the continent of Africa as a whole. We currently support a school in the former and an orphanage in the latter and have achieved an incredible amount of success providing education, nutrition, and even medical care to children who we hope, with the right opportunities, will break the cycle of poverty into which they were born.

I came to Canada as a refugee and had to work hard to survive, continually striving to ensure Divya and I had a place to live, had food on the table, and were as comfortable as we could possibly be. Before becoming a photographer, I had to work odd jobs such as sorting mail at the post office and even as a janitor, which was a far cry and dramatic contrast to my life in Uganda where I was a top official, had a team working under me, and enjoyed a certain level of authority and esteem. It was depressing and discouraging, to say the very least, at the beginning but with time, hard work, and dedication, I have been able to achieve all I have today.

Since the implementation of the Provincial Nominee Program I have sponsored 9-10 families from India all of whom, after a short period of staying with me or other family members upon arrival, have made their own way and now own their own homes, are working at jobs, their kids are fairing well at school, and they are active and contributing members of the Winnipeg community. The advice I give everyone is to work hard at any job they are offered to cover their bills and get themselves established. If one is willing to work, there are always opportunities available.

I encourage people who want to come to Canada that they are free to do so. The society is welcoming but they should come with an open mind because things will be rough at the beginning. I would advise them to start small, setting up a life, and then work towards achieving their goals and greater aspirations.

Canada is, at its very core, a multicultural nation built by and made up of immigrants from all around the world. Attempting to provide a Canadian advice on how to relate to immigrants would be akin to advising him on how to be Canadian; an inane proposition.

But, for those who might require a hint or a bit of assistance, I would ask they keep in mind moving to a new country in and of itself is daunting. With sensitivity, generosity, and warm hospitality, I believe each and every Canadian has the power and opportunity to be an ambassador of goodwill to each newcomer they encounter by letting them know Canada will provide safe harbour and refuge from the problems of their former life. And for those immigrants who are merely searching better opportunities for themselves and their families, Canadians should feel a sense of pride their country is held in such high esteem.

Lastly, immigrants almost on the whole, enrich the communities in which they settle by becoming hardworking and contributing members of society.