A Global Citizen and an International Leader

Patricia is an accomplished leader with diverse experience in international development, foreign policy, government and diplomacy. The UN Youth Assembly has recently selected her as the 2022 Canadian Ambassador for the Youth Assembly Program where Patricia will represent Canada on an International level. 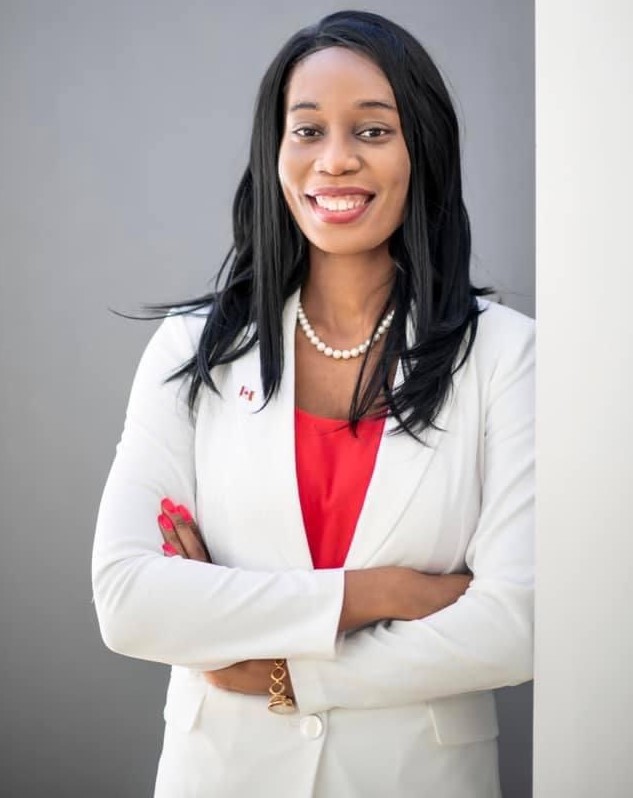 I was born in Bucharest, Romania and at the age of 3 my family and I moved to Athens Greece where we lived for 7 years. My Parents were working in the diplomatic field in Eastern European/Balkans. They left the Democratic Republic of Congo when it was formerly known as Zaire around  1984 for their diplomatic mission to the Balkans. My two oldest siblings were born in Kinshasa, DRC however, I have never been or lived in the DRC – I do hope to go visit one day and I am very proud of my Congolese roots. After Greece, my parents decided for us to settle and immigrate to Canada.

I cannot really tell you how my life was in my country of origin (DRC) because I was not raised or ever been there. I can only speak of my life of my birth country and country I was raised in which are Romania and Greece. I left Romania when I was 3, I can speak more about Greece since that was my entire childhood life. Growing up in Athens, Greece in the 90s was indeed a very pleasant experience for me I was only a child and all my memories are from elementary school. My parents enrolled me in Greek school because they wanted me to understand the language and culture since we were planning to live there for 7 years. Most diplomats’ children get enrolled in English schools, however my parents put me in a Greek public school which I am thankful that they did because I got to appreciate the Greek people, culture even more, and I have one of the bestest friends with over 20 years of friendship from my childhood that I still keep in touch with. I stood out as being the only Black student and the very first Black student at my Greek elementary school, however I didn’t experience discrimination, of course people would stare but it was because of curiosity, my childhood friends and my teachers were extremely kind to me, I was also a very good student and exceled very well in school as well. My childhood life in Greece was good overall, it was hard when we had to move to Canada for me to say goodbye to all my friends.

10-year-old me loved it when we moved here, however in the beginning it was hard because I was missing my life and friends in Greece, also it was strange not hearing people speak Greek outside.  It was very easy for me to adapt quickly though because my whole life was like Canada, I have always been around people from different countries, when living in Greece I also had friends from different countries due to all the diplomatic dinners and events I would attend with my parents.

Some of the main challenges for me was languages: Canadian English & Canadian French. Also note that I  am fluent in  Belgian French, Greek, English, Swahili, Romanian, and basic Lingala.

English was technically not my second language, but my third because I learned English while growing up in Athens Greece. Before moving to Greece at the age of three, at home I spoke French and Romanian.  I attended Greek elementary school all the way from pre-school/kindergarten to half of grade five, and after school  my parents enrolled me in English evening schools and my teachers were Greeks who had lived and taught in United Kingdom (UK) therefore, the English I learned when I was young was British English. When I arrived in Canada I would call “cookies” “biscuits” and had get used to it being called cookies.

Canadian French was another challenge for both me and my family, since we all speak and write European French (Belgian-French) the Canadian French was very different. In grade six my parents enrolled me in a French school which was very challenging for me, I could do all the assignments but had a very hard time understanding the French because of the slangs, terminologies and even how things were said differently.

Also, a culture shock I experienced was the fact I could call my new friends’ parents by their first name. I was raised to always call older people “Mr.  or Mrs.” in Greece that is how it was, same with Romania  & even though I’ve never been or lived in  the DRC it is also the same there, but calling elder “Aunty or Uncle”  even if they are not related biologically to you.

When we moved to Canada my parents already knew friends in Winnipeg and we had also connected with their friends and of course Congolese community and other Canadians from various different backgrounds was also very welcoming as well. It was really easy for us to adjust in Canada. As mentioned, it was not hard for us to settle in.

I have never been nor lived in Democratic Republic of Congo. All my childhood memories were in Athens – Greece and Romania where I was born. It was  such good years, I miss my childhood friends a lot, luckily I still keep in touch with them and I had a chance to plan a reunion in 2015 and went to visit them all, we even went by our old elementary school. I also miss the Greek food!

I went to Romania in 2016 and 2017. In 2016 I went there for work place with the United Nations Youth Association of Romania, where I was Human rights council chair and represented Canada. That trip was amazing because I had the opportunity to go back to my beautiful birth country.  I actually have family in Romania. My late Uncle (my father’s brother) had married a Romanian woman so at that time I went to see my uncle and my Romanian aunt, and I also got a chance to see the hospital I was born in a long with the beautiful house my parents owned when we lived there. I also spent time with our family best friends which they are pretty much our family too, my cousin Geo, her fiancé and my cousin Christu and their parents.  In 2017 I was in Romania for vacation for one month and spent it with family, exploring the country more in small villages and small towns.

In 2015 I went back to Greece for vacation and that trip was EXTREMLY emotional, I had not seen my childhood friends since we were 10 years old, when I planned the reunion and they all showed up, my heart was running like crazy. I had already found them on social media before my trip to Greece, and I knew how they looked like from their photos. We walked to my old school, unfortunately the school was closed since it was summer but, I got a chance to stand by the gate look inside where we all used to play during recess. I was listening to people around me only speak Greek, I had missed that, and let’s not forget the food the delicious fresh Greek food!

Because, I was young, I did not have a job but, believe it or not, since I was young, I wanted to do something that would make a difference in the world. This was due to the influence I got to live and experience through my parents.

My occupation now is in Foreign Policy/Government relations field. My goal is to become a diplomat or ambassador for Canada and continue to make Canada proud on international level.

At the University of Manitoba, I studied International Relations and Political Science where I was named one of Canada’s Most Accomplished Black woman and Woman of Influence.

In 2021, I was appointed as the Global Ambassador of Canada with Youth Opportunities Canada which is one of the biggest International Youth organizations in the world with a great network of amazing young professionals doing extraordinary things in both local and the international community. After a wild 2020, I started to engage young professionals from around the world (virtually) and continued to represent my beautiful country of Canada to the best of my abilities, whiles equally teaching and bringing awareness to every young professional person the opportunities that exist. I will always continue to be proud Global advocate for Canada.

I did a lot of volunteering with organizations that do work on things that I appreciate and I am passionate about. I also had some great mentors in my life aside my family such as professors and close trusting friends that inspired me.

The advice I would give to newcomers is that Canada is a beautiful rich country that is filled with many opportunities. It is very important when you settle here, whether you are 10,20 or 50 years old to  surround yourself with good people that will be there to support, guide, and mentor you.

It is important to volunteer – it is a great way to meet and get to know people outside your own community. I am not saying do not hang out with your ethnic community but, also meet others because we are in a diverse country, you will appreciate other cultures.

Another advice I would give to newcomers is try and learn and also appreciate  Indigenous people and their history. Attend indigenous cultural events, classes because after all we are all immigrant on their beautiful land.

Help each other-  we are all immigrants or children of immigrants in this country with the exception of the Indigenous people. Also respect and teach one another. Some newcomers may have a hard time adjusting to things like the food, or even diversity they may not be used to seeing people from so many different backgrounds in one country or in school.

I have volunteered with newcomers and I saw cases where people are having a hard time fitting in within the Canadian society. Be there for them and also teach them the beauty and opportunities this country has to offer.