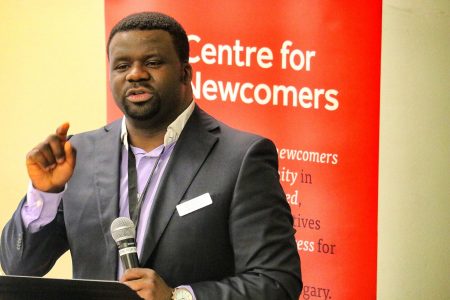 Fobete Dingha Ngoh hails from the Anglophone region of Cameroon and the last of a family of 8 children. He studied at the University in Buea where he obtained his Bachelor of Science Degree in Political Science. He furthered his education in Germany where he studied Global Political Economy at the University of Kassel, state of Hessen. He also studied at Brandon University where he obtained a Masters of Rural Development. Fobete is married to his beautiful wife, Bridget and they have two wonderful girls.

I moved to Canada in July of 2008 from Germany. I left my home country Cameroon in 2003 for Germany to study Global Political Economy at the University of Kassel in the state of Hessen. After my studies in Germany, Canada opened its doors for the highly skilled immigrant visa which I applied through Quebec and I was given the selection certificate. Life in my country was good for me, however, after my undergraduate degree and work experience for one year I left for Germany for further studies. In Germany, life was not as easy as one thinks especially for a black man. Profiling was common, discrimination and racism were visible.

My first impression on arriving at the Calgary international Airport depicts an atmosphere of welcoming and belong compared to where I had lived before. The Canadians I met expressed an atmosphere of relationship building which was different from Germany where people are mostly reserved.

There were many challenges I faced when I came to Canada. The weather was so severe; I had never experienced such a cold place in my life before. I thought European winters were harsh but Canadian winters were on a different level – I was so wrong!

Discrimination was also an issue. Every individual has an accent, be it American or British we do have an accent. I recall an incident with one organization where I had gone for an interview. During the interview, the interviewer said that she did not understand me until she brought in another employee to have a conversation with me to access my language proficiency. However, the employee did not have any problem understanding me as the conversation went on swiftly in English. This was an embarrassment for the organization and for the lady as well. Worse still, the interviewer had taken originals of my documents, and a copy of my passport which was I later understood was against the law but being new in the country, I did not know at that time. I found out later that this is something this lady had been doing to.

My friends and family helped me navigate the Canadian system, they advised me to start by volunteering in any place. I volunteered with YMCA as a Youth Worker, working with immigrant youth in the ‘After School Program.’ My community also helped me with opening a bank account, insurance, applying for permanent residence, and getting my driver’s license. Also, my church provided me with references in case of an interview.

I miss the weather, family, family, and the food. In Calgary and Brandon, African food was very expensive, and one must spend so much on a small portion. The weather back home is warm since we do not have winter.  I thought Europe was colder than Canada, but to my greatest surprise, the cold weather in Canada makes me miss home even more.

I have gone back to Cameroon to visit my family twice so far since moving here. There was a huge change structure-wise. I know, I miss the warm weather but, having lived in Canada for almost a decade, I had acclimatized myself with the cold Canadian weather and going back home, and the heat was unbearable. Corruption was still an issue and worse than what Ayi Kwei Armah describes in his book “The Beautiful Ones are Not Yet Born.”

Back in Cameroon, I completed my undergraduate in Political Science at the University of Buea. After completion, I worked for one year with an NGO that focuses on sustainable community and economic development. The company engaged in chicken feed production and distribution within the region of North West. I went to Germany to further my education where I obtained a Master of Arts in Global Political Economy. Before completion of my MA in Global Political Economy, I was an intern at the Middlewich Community Centre, under the capacity of a Youth Coordinator responsible for the centre. I then started another Master of Science in Environment and Resource Management at the University of Cottbus. While in Canada, I obtained another Master of Arts in Rural Development.  I have worked with both the Federal and Provincial governments in Canada. As of present, I work for the Centre for Newcomers as a Welcoming Community Associate and with Enviros as a Youth and Family Worker as well. My goal is to advocate for immigrants in whatever capacity I can as well as empower youth to make an impact.

What Steps did you take to achieve the occupation you are currently in?

When I moved to Calgary, I started volunteering with the Ethno-Cultural Council of Calgary and during that time, I got to meet lots of people through networking. During my volunteering, I got a position at the Ethno-Cultural Council of Calgary. I worked for the council for almost two years before I left. I applied for an opening at the Centre for Newcomer of which I had an interview for and I was offered the position. Mostly, I had spent time volunteering within the immigrant service area which gave me access to meet lots of people and I gained an understanding of the immigration sector. Significantly, my thesis at Brandon University was on using social network to attract and retain newcomers in smaller and rural communities.

My life has changed drastically for better. I came to Canada as a single man but now, I have a family. I have a beautiful queen and two princesses on this planet. My goal is to labour for them and give them a better future. Where I have not gone, they should be able to go.

Settlement in any place is a process. ‘Trust in the Lord always and yield not unto your own understanding but in all your ways acknowledge Him and He shall direct your steps.’ Every newcomer must believe he/she can make it irrespective of the challenges, have a vision and a goal, write it down and run with it. Have a support system in a time of need, put your energy in volunteering, and build social networks and capital. In worse case scenario, take a course in the university.

All that glitter is not gold. Hard work pays and every cent matters and is accountable for.